Francisco Bosoletti is a young Argentinian street artist, best known for his large-scale murals. Poetic and eclectic, his works show pictorial elements in which the figure of the human body and reflective floral component forcefully emerge and gain the upper hand on reality.

Born in 1988 in Armstrong, a small town in the interior of Argentina, Bosoletti started his artistic development as a child in art studios. In 2010, he graduated from Illustration and Graphic art school in the city of Rosario and started working in an advertising agency. His first glance at the career in art and an awareness that he could become a full-time artist was during his trip to Europe. He stayed in London for a few days, drawing and sketching everything he saw, usually on a piece of paper he had by his hands, such as envelopes and napkins. People started to come to him and ask if he would sell any of the artworks. Bosoletti then took a chance and realized he could make a living from his drawings, done in just a few minutes. After the return to his hometown, he joined the local street art scene.

Bosoletti has undertaken a unique artistic research whose aim is to oppose the all-pervading power of economic and financial speculation through a combination of both a provocative and rebellious attitude with a classicistic style. The symbol he has chosen for this battle is the tulip, the protagonist of one of the most incredible speculative intercontinental business operations. A poetic and elegant flower, in Bosoletti’s works the tulip mixes with human figures that as a result are transformed into totems, signals, arrows, and warnings whose aim is to preserve an idea of coherent humanity within the pictorial metaphor. Making use of vigorous brushes and an earth tone color, the artist works on a double creative track – from one side he explores the horizon of the feminine movement, characterized by iconic and ritual gestures that unleash a shamanic ritual directed by the omnipresent tulip, which fights and interacts with the energy lines of the painting. On the other side, Bosoletti sets on exploring the settings and scenarios hiding behind the surface of the wall, which he retrieves and brings back to light.

An example of Bosoletti’s work is the mural in the province of Santa Fe, Argentina. Just down the road from where the 26-year-old artist lives and works in Armstrong, Argentina, this wall is raising awareness toward environmental degradation due to modern urban development. Entitled as Guardián Anti-Urbe or Guardian of Anti-Urbanism, the character of a guardian in the piece appears to be watching over the green lot in front of him. Through this piece, Bosoletti is painting to the importance of nature – parks, squares, lawns, empty lots, gardens and streams in urban environments.

I first discovered Francisco Bosoletti‘s unique ultraviolet technique when he recently visited the neighbourhood of Rione Sanità in Naples (covered here).
Francisco Bosoletti was born in Armstrong, a small country town in the central area of Argentina where he still lives today. Away from the scene of graffiti in big cities, the development of his work on the street comes from his interest in the classical art. Making the most of living in an area where the freedom to intervene in spaces without any kind of obstacles is possible, his small town and its surrounding have become his studio. In the last years he has been focusing on his artistic career in Italy realising different projects including works in public spaces and in his studio. Shortly after his arrival in Italy his work began to receive great interest which gave him a place on the international urban art scene taking part in many projects around Europe and the U.S.

This year’s edition of The Crystal Ship in the city of Ostend in Belgium was a great opportunity to catch up with Francisco. In this interview I find out more about his background and also about his negative technique that he presented during the Festival.

When I finally met him in Ostend and saw him progressed on his mural during The Crystal Ship I wondered how the project with the festival came together. Francisco explains ‘I think thanks to the magic of the internet the Festival was familiar with my work and they contacted me several months ago to find out if I was interested in participating in their project’.

Once I settled in Ostend I discovered the artist’ work for this year’s edition where he painted a woman’s portrait. While finding out more about the subject and the story behind his artwork, Bosoletti commented that he decided to use this image as a representation of a part of the history of the city that he found very interesting.

‘During the Spanish Civil War (1937-1937) Ostend and some other cities on the Belgian coast were the place of exile for thousands of Spanish children, known as ‘Children of War‘. These children spent many years away from their families, and many of them never saw them again and continued their lives in these cities’ he says.

‘The photograph is quite old, from the 50’s I believe, and was actually taken in Ostend. We are not sure who this young woman really is, but it is very likely she could have been a girl from the war’.

‘It is undeniably a very important piece of history that lives with many families of Ostend. In fact, while I was painting the mural I was discussing with locals who asked me about the work. I explained that the history of the children of war was deeply linked to their culture, but not to the naked eye, not in a superficial way. It was instead something deeper, from within the history of each family that adopted a child’.

‘It seemed very interesting to relate this story to my technique of painting in negative as it allowed me to try and generate the memory of those deep meanings that mark our history but that are unseen by the naked eye’.

When you see his work unfolds you can’t help but question how this negative effect is achieved. Perched on his cherry-picker Francisco used two photographs as a point of reference to achieve this effect. He just made it looks so easy to realise and I wondered what the genesis of this concept was. Francisco explains that ‘the concept was born in Naples, Italy while I was working on a project with a very powerful social element. Naples, like many other cities in the world, is a clear example of how society can easily be superficial without making much of an effort to acknowledge the different realities. This is where I made my first intervention using this technique. The meaning behind it implied that you could look at things in a positive way, and get rid of the black ‘filters’ imposed on us, especially from the media’.

‘The mural ‘Speranza Nascosta‘, was made in a homeless shelter where many people work hard without getting much help when they do so much for the Society. And this is just one of the many realities that no one sees unfortunately’.

‘I try not to be invasive with spaces, and this type of works goes almost unnoticed by people. But then, if you make an effort and get interested in really knowing what is there, some manage to decipher it’ he adds.

‘These days anyone has a cell phone in their pocket, and you can easily reveal the negative image of my work. However, my work goes beyond that message as I am not really interested in knowing if people look at it with or without a filter, if it is easy or if it takes a while. The idea is to generate a deeper interest, whether the viewer takes it in a good way or not, I’m interested in them finding out by themselves that this is not just stains on a wall but there is actually something else beneath’.

Talking about his technique, I was quite intrigued about his process and asked him to talk me through it. Francisco explains that the process is done observing both the photographs in negative and positive mode, while he is watching through a camera to see if the positive effect is on track. It is something that takes time but he find s it very entertaining. He only uses rollers and brushes, and sometimes he makes some details with spray paint.

‘The scales are already are now quite natural. However, I did not start painting on large scale murals immediately; it was a progressive approach that I have developed over the past few years’ he adds.

Surely there must be challenges in this process, the artists comments that ‘there are always challenges, it’s the fun part in being able to paint on the streets. There are many elements that influence each work and each new intervention is a challenge, and rarely does everything come out as you had planned’. 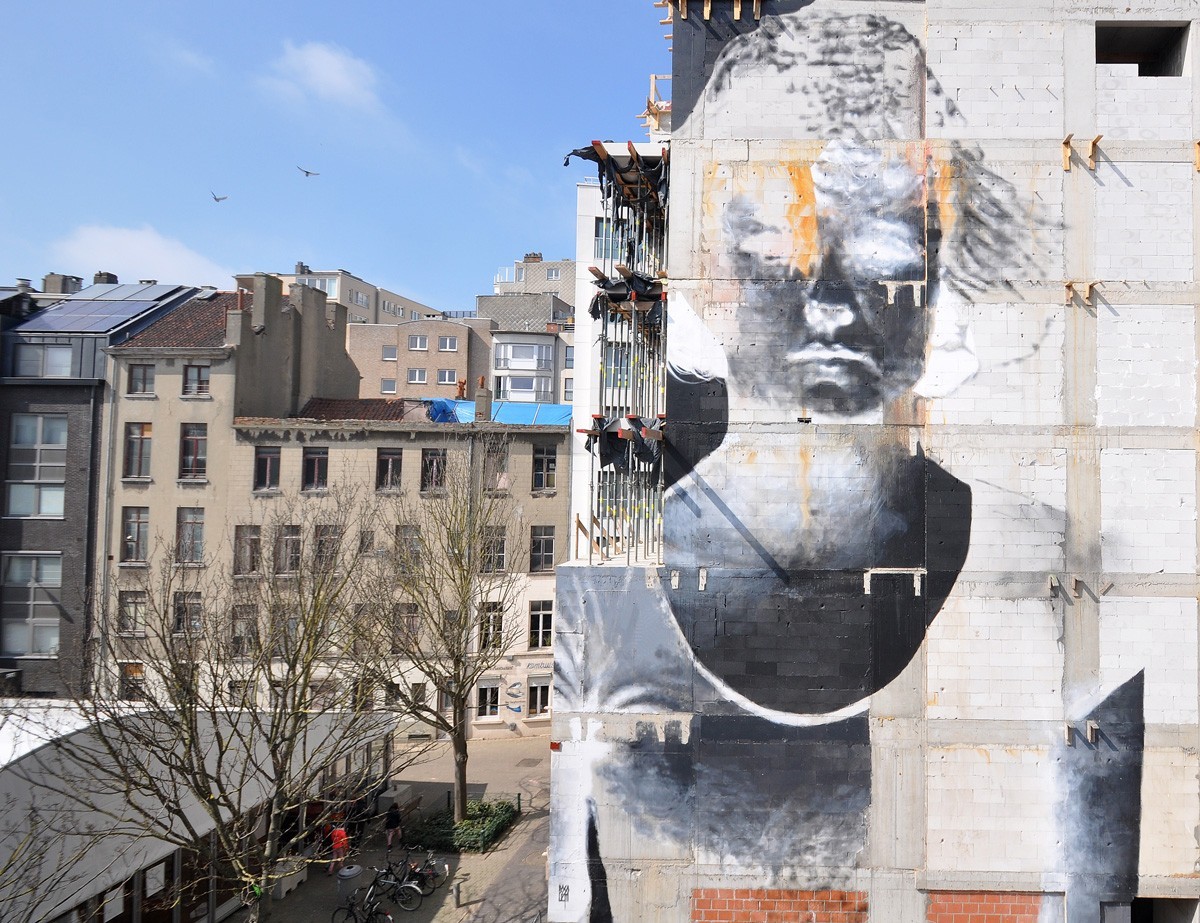 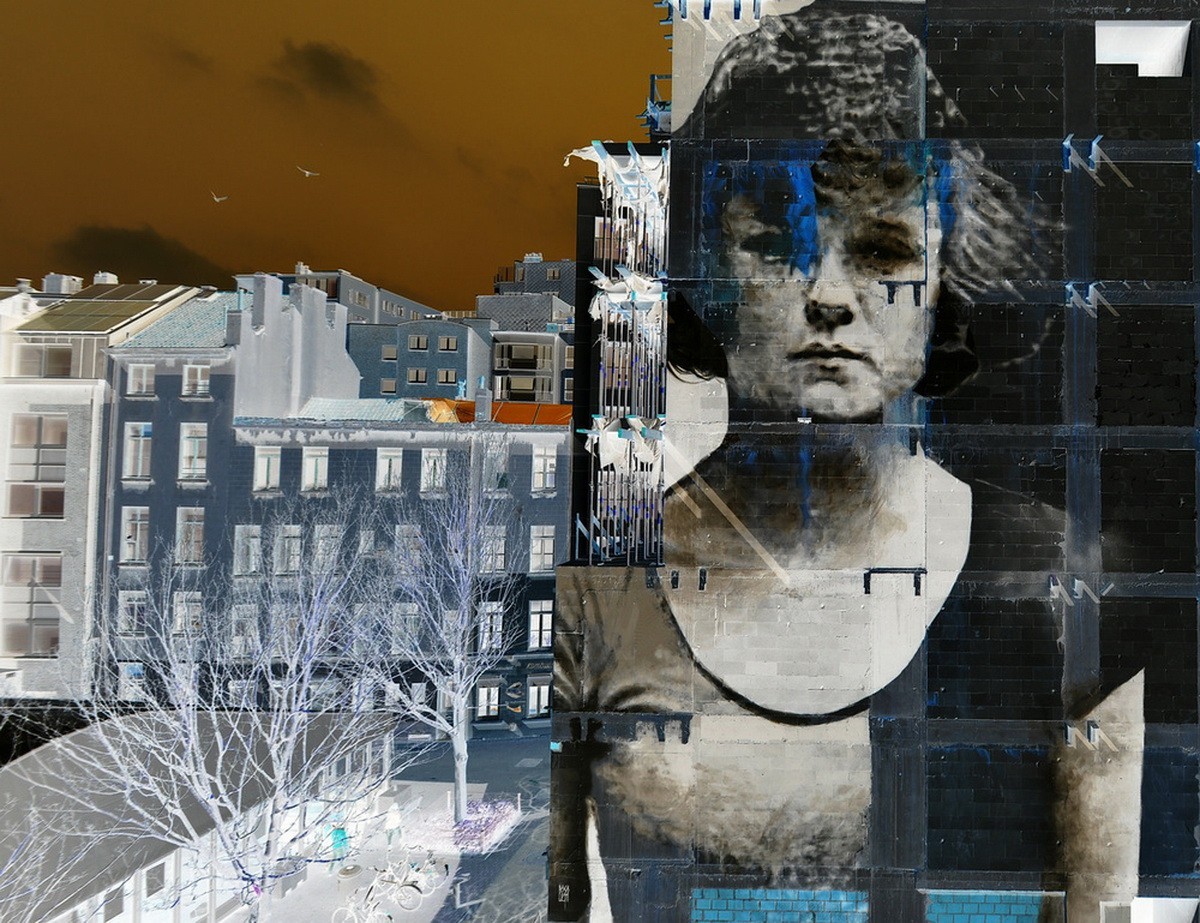 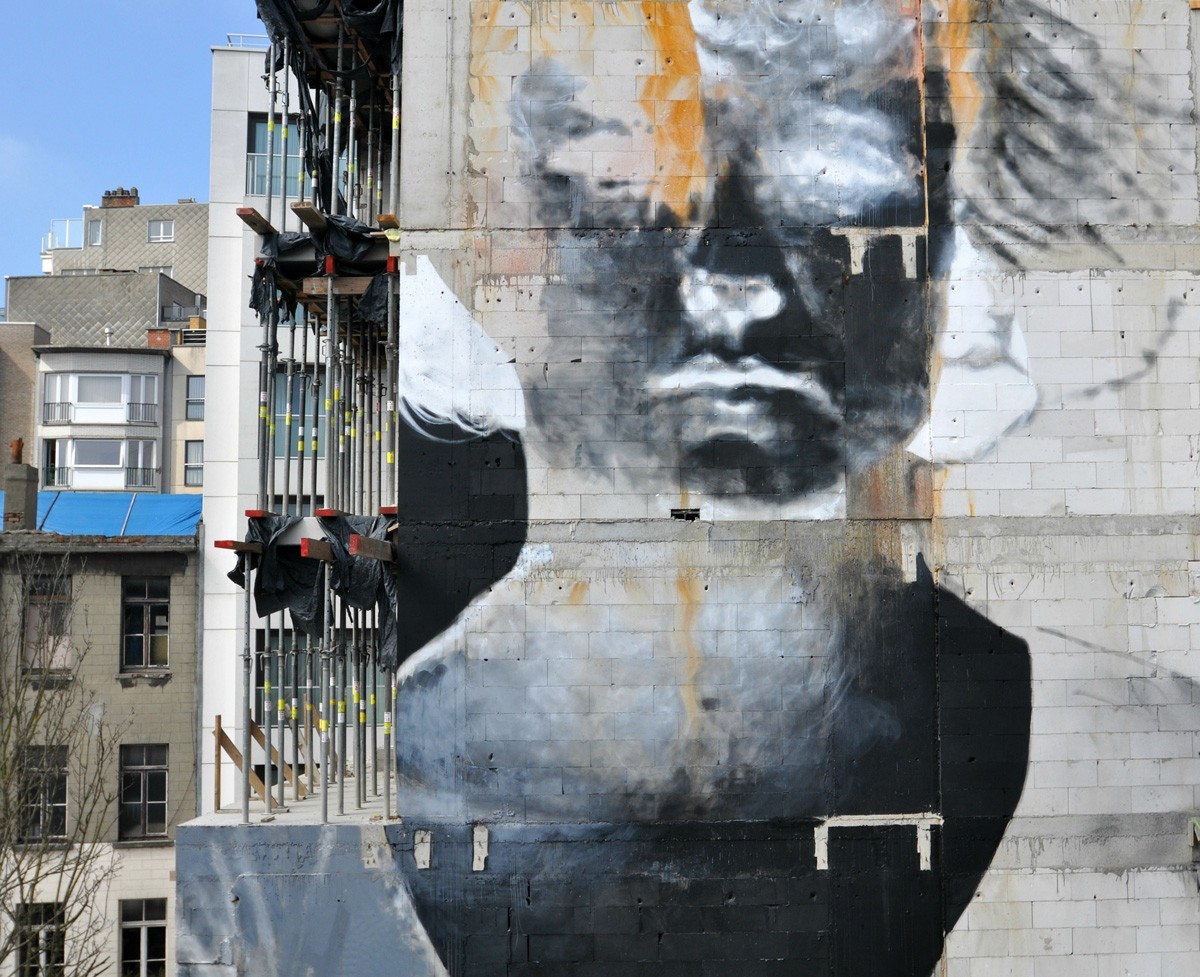 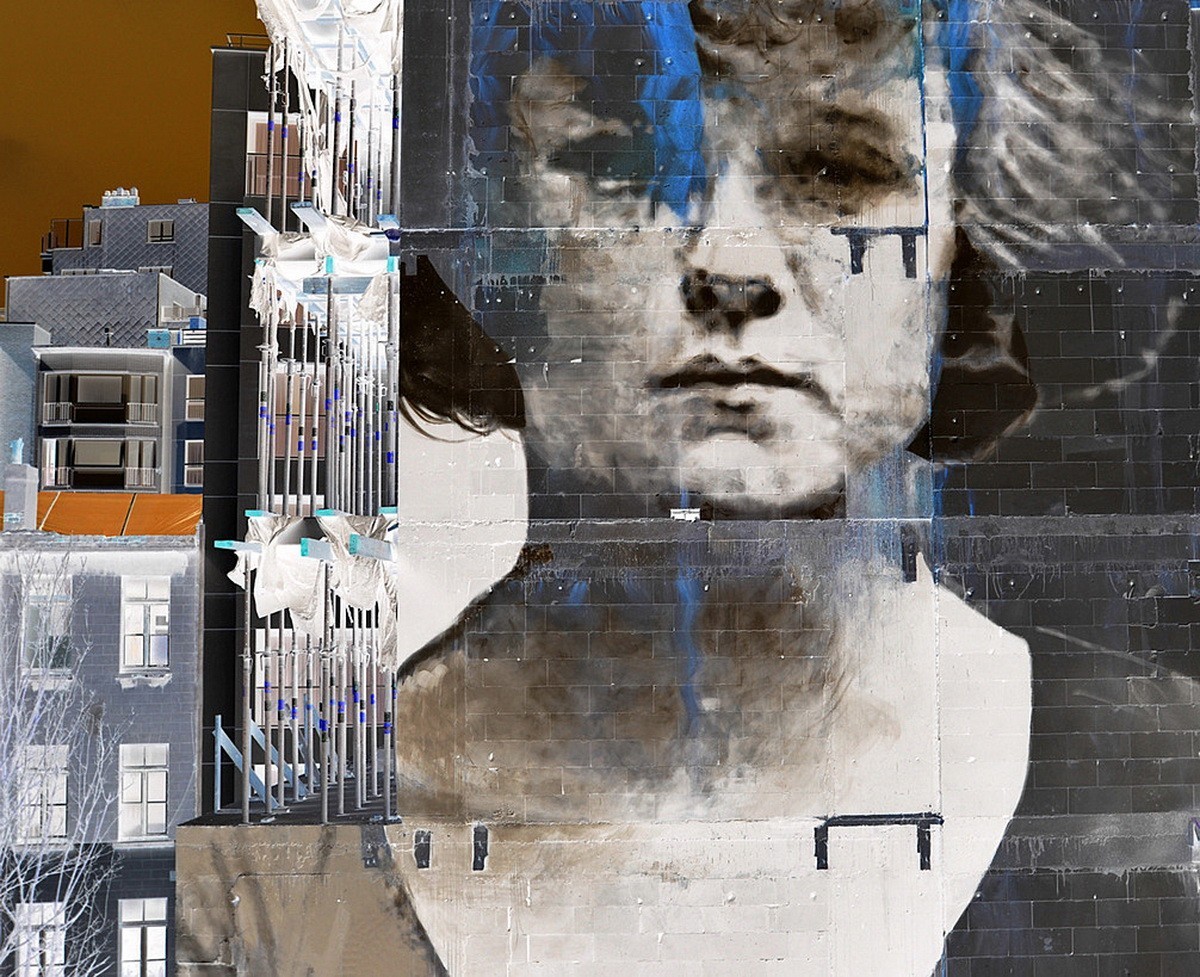 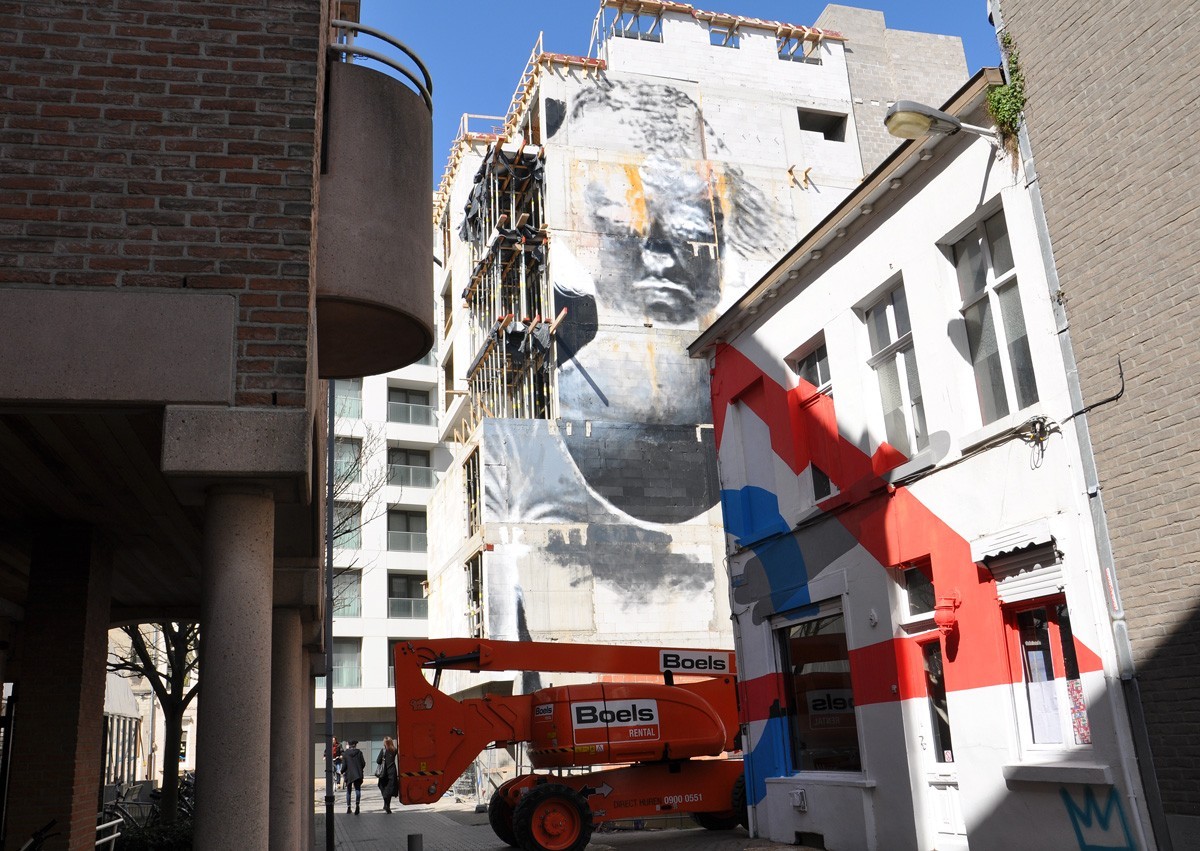 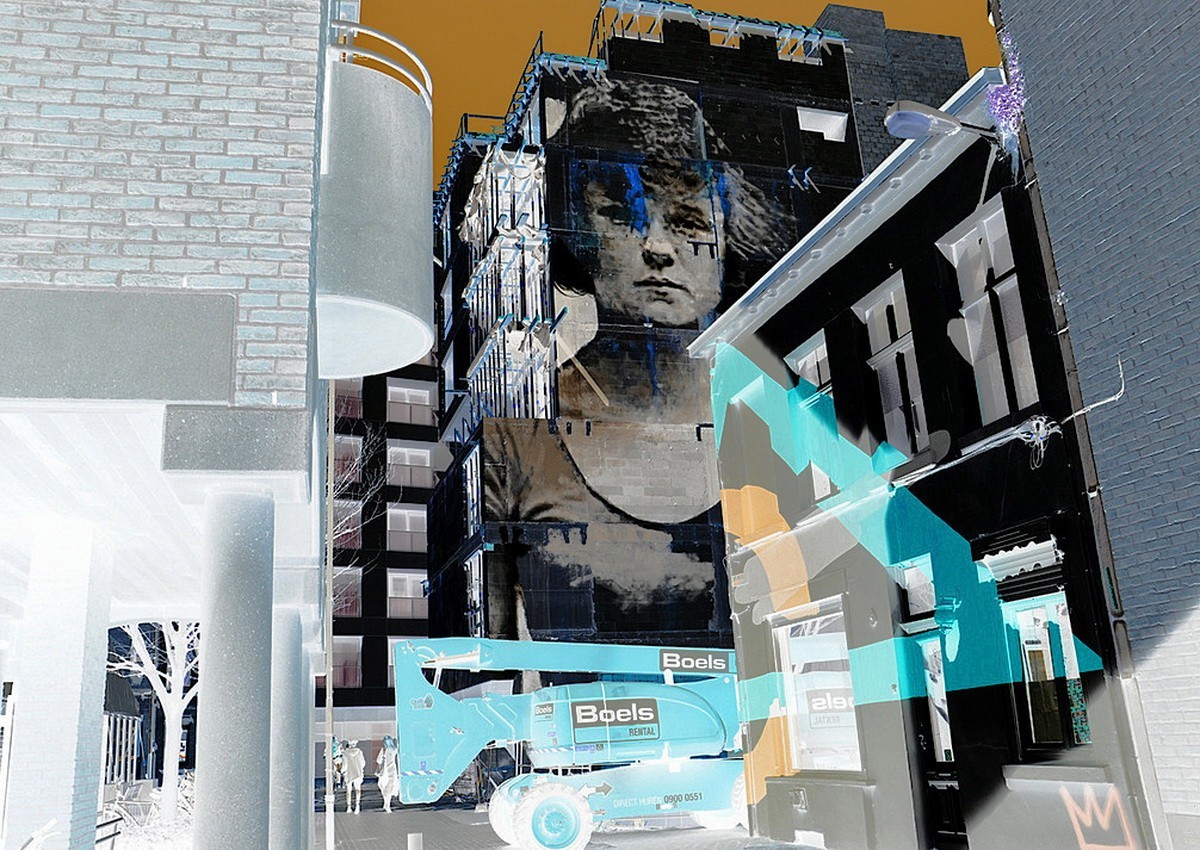 Open chat
Powered by
Hi
WE ARE LOOKING TO HEAR FROM YOU |
CALL US NOW or DROP US A LINE at E-mail: contact@walldeko.eu